You are here: Home / Archives for South Sudan 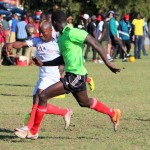 This was the final of the World Refugee Cup series between Liberia and “Best United” (qualifying games have been run over the last month or so).  The final was played at the World Refugee Day Community festival at Annerley (Brisbane).  The game finished with a 1 all draw, but after some controversy over how decide […]